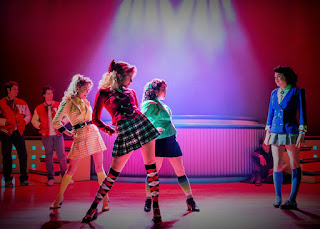 I've become super obsessed with this musical and (while I literally listen to this soundtrack on repeat), I decided I'd review the soundtrack!
Act 2 has to be my favourite of the two because all the tension has been built up and the songs are just so damn catchy! Heathers has the feel of a psychological thriller which is brilliant when made into a musical with rocky songs and amazing lyrics.
I'll link my Act 1 review here in case you missed!

My Dead Gay Son
I tend to skip this song quite a lot because it's a bit too chirpy and gospel for my taste- I'm much more a fan of the dark and sinister songs. It's a great concept and it is really great to watch a performance of it but I don't tend to listen to it all that much. 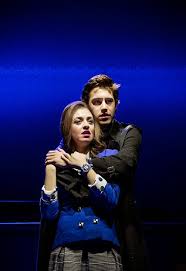 Seventeen
This is another of my favourites. It's such a sweet and tender moment for the relationship between Veronica and JD. This song's such a moment of vulnerability for both of them and it's lovely to listen to. The song itself is really calming and catching and easy to listen to over and over again. Though, I do kinda love that the essential content of this song is Veronica asking JD to choose between her and killing... tough decision.

Shine a Light
I like this song but I do skip it most the time. It's just too long for my taste and I don't care that much about Mrs Fleming. It's still fun to listen to on the odd occasion but it's not as catchy as any of the other songs, in my opinion.

Lifeboat
This is on my list of favourites. It's so subdued compared to the others songs but I love that. It's really stripped down and meaningful. It describes the anxiety of school so perfectly and it was a really great opportunity to sympathise and relate to Heather McNamara. It's so relatable and creates a really personal connection to the show for me. The emotion in the way Heather McNamara sings is compelling and it's probably the song that makes me closest to crying in this musical.

Shine a Light (Reprise)
I like this song a lot more than the original Shine a Light. It's so brutal and harsh but really shows certain realities. And it also makes me hate Heather Duke more and more...

Kindergarten Boyfriend
This is a beautiful and tragic song but I find that skip it a little. It's lovely to see a bit more of Martha and it's her time to shine within the show. I find it so sad when she sings about the realities of certain girls destined to be alone... it makes me want to give her a big hug. Plus, she's got an amazing voice.

Yo Girl
I love how Heather Chandler, Ram and Kurt sing this song. It's like they're taunting Veronica for officially becoming cruel and vicious enough to be a true Heather. I also love the anticipation of JD climbing into Veronica's room at the end. A horror/thriller movie film kind of feeling was created and was done so well. I was practically gasping and my heart was hammering when I first heard it- JD entering her room.

Meant to be Yours 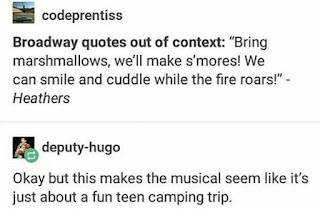 From this song onward, I love love love this show. Meant to be Yours is arguably my favourite song along with Dead Girl Walking. I love the craziness of it. The lyrics are fast and insane and suddenly switch to loving and calm when he sings about how he's meant to be Veronica's. Some of the lyrics show just how insane JD is- especially when he talks about making s'mores and cuddling while the school burns and kills everyone inside! What kind of person says that!?
But you can really see how dependent JD is on Veronica and how much he loves her- it's compelling. He begs her to stay with him and it just plays with your heart strings.
This also has to be the best song to sing at the top of your lungs.

Dead Girl Walking (Reprise)
This is another of my favourites. The song is so catchy and has so much attitude! I especially love this version as Veronica confronts JD- there's so many emotions portrayed through the song. I love the part where she says "i wish we'd met before they convinced you life was war. I wish you'd come with me" and he just replies "I wish I had more TNT." That line is like a slap in the face to me every time I hear it. It's so brutal but brilliant and I listen to this song on repeat so much. 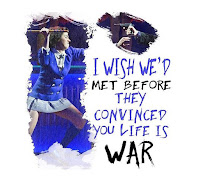 I Am Damaged
I love this song too. It's JD's final opportunity to redeem himself by sacrificing his life for Veronica's. I love how he keeps repeating "our love is God" and Veronica replies "say hi to God." The lyrics are so good! I also love the bit at the end where Heather Duke says "you look like hell" and Veronica replies "I just got back." I just really appreciate it for some reason.

Seventeen (Reprise)
I like this song but I don't listen to it much for some reason. It's nice that friendship is the final happy ending for this musical and it wraps everything up nicely.

Thanks for reading! Feel free to comment your thoughts. Stay amazing!
Chloe
Email ThisBlogThis!Share to TwitterShare to FacebookShare to Pinterest

Bookstagram- @forever_fictional
Goodreads- Be my friend!
Facebook- Check out my page- extra content!
Email me at forever.fictional@yahoo.co.uk
Pinterest- All my edits and other pics in one place!!
Bloglovin' 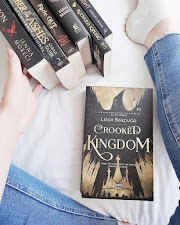 F**k No!: How to stop saying yes, when you can't, you shouldn't, or you just don't want to
by Sarah Knight